How Lionel Messi and Wayne Rooney Think on the Field

One freezing night this January, I was sitting in the Camp Nou with a Barcelona official, watching Barca-Atletico Madrid in the Spanish Cup. When the game kicked off, the official said, "Watch Messi."

It was a puzzling sight. The little man was wandering around, apparently ignoring the ball. The official explained: "In the first few minutes he just walks across the field. He is looking at each opponent, where the guy positions himself, and how their defense fits together. Only after doing that does he start to play."

The stats tell the story. Messi has never scored in the first two minutes of a match. All his 442 goals for club and country came after that. Moreover, his career haul for the third and fourth minutes combined is a meager three strikes. Admittedly the opening minutes of most matches are pretty closed. However, Messi in this period is scoring at less than one-sixth of his normal rate. Instead, he spends the time doing an on-field analysis.

This points to a truth that we often miss amid the frenzy of top-class soccer: It's a thinking game, much less spontaneous than it looks. Even apparently instinctive creators and goal scorers like Messi are forever making calculations, often very conscious ones. To understand today's soccer, you need to grasp these conscious thought processes.

We are getting used to the idea that defensive players tend to move around in patterns dictated by their coaches, almost like in American gridiron football. This is becoming truer as soccer clubs employ growing tribes of video and match analysts to study opponents.

The consequence is that players for big teams now enter matches thoroughly briefed on what to do. Months before the World Cup in Brazil began, every man in the German squad had access to an app on which the team's many analysts would post useful videos. Before the France-Germany quarterfinal, the analysts emphasized one video in particular: an apparently unremarkable scene of the Dutchman Daley Blind tracking his opponent in a Holland-Germany under-21s match in 2013.

You watch the video and forget it almost instantly: The German attack peters out, with the Dutch keeper easily picking up a low pass. But that's because Blind was doing something crucial: After two German players attempted a one-two pass, he didn't follow the ball but kept running with the German who had started the move, staying with him until the attack was dead. It was exactly the right thing to do. The German analysts expected Blind's defensive ploy to be especially important against the French, whose soccer culture traditionally favors one-twos. The German players studied Blind, and then did as he did. They shut out the previously impressive French 1-0.

Before the semifinal against Brazil and the final against Argentina -- two other countries that like one-twos -- the players watched the Blind video again. When the German FA's chief data analyst Chris Clemens told this story to the Dutch journalist Michiel de Hoog, he even suggested a headline for his article: "How Daley Blind saved Germany's World Cup."

That's the pre-planned nature of modern defending. But for creative players, planning and thinking work rather differently. You can't tell them how to beat a man. However, the best ones, like Messi, do the thinking for themselves. Even when surrounded by opponents in high-speed situations when a normal person would have to rely entirely on instinct, they think fast enough to process data in their minds.

In 2004, Carlos Queiroz, then coach of Real Madrid's Galacticos, told the author John Carlin how great players see on-field situations. "Imagine two cars colliding. For us it happens at normal speed," Queiroz said. "They see it in slow motion. They catch a lot more details in the same time as us. They can compute in their minds more details than you and I can see.

"Therefore they have more time than others. The great ones see the game in slow motion, but really it is in normal time."

If you can see the field, you can see the openings. The longtime director of AC Milan's "Milan Lab," the Belgian doctor Jean Paul Meersseman, told me that this quality of "sensory perception," "interpreting detail inside the brain," may be the most important in soccer. It matters more than any physical gifts. When I asked Meersseman who had it, he named the Brazilian Ronaldo: "He can perceive situations so fast and react to it, it's just amazing." In part, great players can do this because they have imagined the situation long before it happens. This is the psychological technique of visualization. Look at how Diego Maradona, in his autobiography, describes his famous dribbled goal against England in 1986. He starts by saying, "The goal was a kid's dream." In other words, he had visualized it for years in advance.

Then, even while he was dribbling through half the England team, he was watching his teammate Jorge Valdano make a run to the far post. Maradona kept meaning to pass to him, but the moment was never quite right, and in the end he found that he had beaten everyone including the keeper, so he just scored. In short: In his mind, things were happening so slowly that he could keep one eye on Valdano.

Lastly, at some point after the goal Maradona recalled something his brother Hugo, nicknamed "El Turco," or "The Turk," had told him after a game in 1981, when Maradona had dribbled through the Scotland team but then shot against the keeper. "Idiot!" El Turco had chided him over the phone. He told Maradona he ought to have dribbled around the keeper. Five years later against England, that piece of advice was lodged somewhere in Maradona's brain, ready for use. Wayne Rooney -- often wrongly derided as not the smartest person -- consciously visualizes. "Part of my preparation," he told the writer David Winner for ESPN The Magazine in 2012, "is I go and ask the kit man what colour we're wearing, if it's red top, white shorts, white socks or black socks. Then I lie in bed the night before the game and visualize myself scoring goals or doing well. You're trying to put yourself in that moment and trying to prepare yourself, to have a 'memory' before the game. I don't know if you'd call it visualizing or dreaming but I've always done it, my whole life."

The best players tend to have an exceptional visual memory. That enables Messi to store his observations about opposing defenders. Schalke 04's Dutch center-forward Klaas Jan Huntelaar, whom Louis van Gaal once called "the best striker in the world in the 'sixteen,'" that is, in the penalty area, can describe in exquisite detail opponents' positions on goals he scored years before. Huntelaar told me he usually didn't shoot on instinct. "The moment when I shoot, I reason through my position." Sometimes he will have observed that a keeper is weaker going to one side, or that a defender is easier to beat on his right than his left. All that information will go into Huntelaar's shot. When I remarked that it sounded as if he had his own personal GPS system, he joked: "Yes, it's in the back of my head."

What players like Huntelaar are doing is conscious but almost impossibly rapid decision-making. If you are a player in scoring position in a big game, teammates and opponents are moving in different directions around you. You have to estimate where everyone will be in 0.1 seconds from now, and then again in one second, make your decision accordingly, and then execute it in a tiny space with almost no margin for error.

It's like a combination of chess and NASCAR racing. If great players make their decisions look instinctive, that's only because their pace of thought is so rapid. Rooney said to Winner: "After the game, mentally you're tired as well. Your mind has been through so much. There's so many decisions you have to make through your head, and then you're trying to calculate other people's decisions as well. It's probably more mentally tiring than physically, to be honest."

Messi and Rooney are not scintillating conversationalists. But appearances deceive. In truth they are among the sharpest thinkers around.

Simon Kuper is a contributor to ESPN FC and co-author, with Stefan Szymanski, of Soccernomics.


This article first appeared on ESPN FC and was written by Simon Kuper. You can see the original article HERE

Why having high expectations for yourself is SO important! 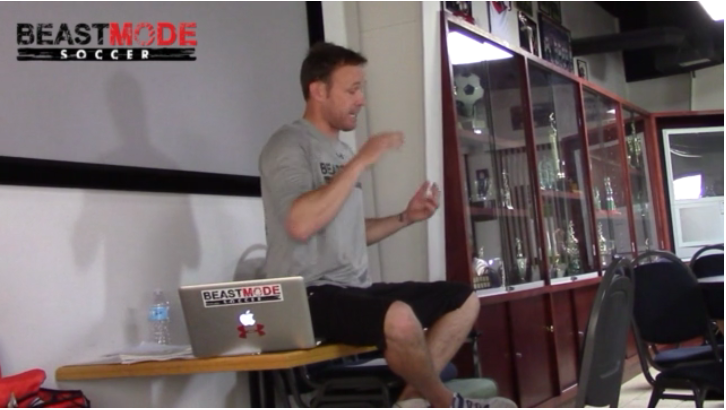 Beast Mode Soccer founder David Copeland-Smith explains why having high expectations for yourself is SO important. This is an exert taken from a seminar in Vancouver Island, Canada during the Women's World Cup 2015. Check it out below: