How To Improve Your First Touch

So you've got your kill touch down, but you struggle to find space immediately? This is what we call the 'progressive' touch here at Beast Mode Soccer. Check out the drill below with MLS legend James Riley and pro player and long time #teamBMS member Brooke Elby.

In this drill we use five different progressions: Inside of Foot, Outside of Foot, Inside Roll, Poke Around and Shimmy!

Give it a go and let us know how you get on!

The Best Soccer Drills To Develop Your Skills

The biggest problem that most players faced when training on their own or with their friends is that they just do not know what to work on! Well guess what... We have you covered!

We recently teamed up with our friends at soccer.com to bring you a full video with one of our four drill Skills Stations. Not only that but we have pro players Beverly Goebel-Yanez and Lauren Barnes, as well as Beast Mode Soccer Seattle Trainer Othaniel Yanez! Check it out here:

As with everything Beast Mode Soccer, your focus should be on clean technique. The great thing about these drills is that you are constantly mentally overloaded, thinking about movements, eye ball coordination, and clean technique.

Grab some teammates, some cones and a ball then head outside to improve TODAY!

This is the first of two Skills Stations that will have for you. The next one will be coming next month!

If you are looking for a complete individual training program, check out The Soccer Vortex... the most comprehensive system on the planet!

How To Juggle in Soccer: The Juggle Ladder

Soccer juggling! I always hear that just because you can juggle does not mean you can play soccer... And it's true... BUT... I have never met a great soccer player that cannot juggle!

We like our players to juggle a tennis ball, skills ball and a regular sized ball as part of our warm up. Sometimes we will also throw in some old UNC routines, and also... The juggle ladder! Check it out below

Juggling a soccer ball helps your first touch, eye ball coordination and balance, just to mention a few things. Aim to juggle for at least 10 minutes a day!

THE Best Way to Become a 1v1 Soccer Master!

At Beast Mode Soccer we are known for producing truly phenomenal 1v1 artists. Players who can absolutely dominate their defenders in 1v1 situations and can just turn the game! There are many, many facets to becoming a true 1v1 artist, but one of them is having the confidence to do moves in a game... And you learn that by doing them in game like situations! Check out the video below, which highlights our favorite 1v1 game, 'Nutmeg Knockout.'

How To Get A Better First Touch in Soccer

How do players have that flawless, velvet type first touch? Easy.... Practice! Below we have a video of one of our favorite drills that teach players how to get that coveted 'kill' touch. We simply set up a 2x2 (or bigger if you need more space to start with) box, have two teammates 10-20 yards away. They play the ball in and you have to control the ball, with your first touch inside the box!

We will be adding more and more videos to the blog, so be sure to check back!

Technical Breakdown Part 1: How to get a sublime first touch in soccer

Today I will show you a video of two players, and tell you why they are my favorites to watch, purely because of their absolutely sublime first touch. Check this short video out:
Obviously by now you know that I am absolutely OBSESSED with players technique. I have studied Dennis Bergkamp and Dimitir Berbatov for literally hundreds of hours, and our ‘touches’ series in The Soccer Vortex is basically based on these guys and other world class class players. I highly recommend that you read Dennis Bergkamp’s book ‘Stillness and Speed’, where you can find out exactly HOW he managed to achieve such a worldy first touch. Remember, first touch isn’t just ‘killing’ the ball dead. You need to be able to manipulate the ball so that it goes exactly where you want. We teach the kill touch, but more that that we teach ‘progressive’ first touches, teaching players to look for space to play the ball into in order to set themselves up for their next movement. The second touch is JUST AS IMPORTANT as the first! To show exactly what I mean, check out one of my all time favorite goals by Dennis. It’s the quarterfinal of the World Cup in 1998. It’s the last minute and the game is tied 1-1. De Boer gets the ball, makes eye contact with Dennis… Plays a great ball. Dennis brings the ball down with an absolutely world class first touch… Now at this moment, most players in the world are going to take that ball to the right… It’s the correct decision, you’re shielding the ball from the defender, who’s moving at pace and you should be able to get a shot off or at least hold the ball up to wait for a better option… However… This is Dennis Bergkamp. Watch his SECOND touch. This absolutely makes the movement. Anticipating the defenders speed of movement, Dennis cuts the ball back with the inside of his foot immediately after his first touch. The defender fly’s past. Now… Most world class players would use their left foot to power that ball home… But again… This is Dennis Bergkamp. Spotting the left corner of the goal open, he delicately and gently uses the outside of his right foot to curl the ball around the advancing keeper. Absolute genius.
ll you need to get a first touch, and second touch is a wall, a ball and a few cones.

Check this video out where I show you one of my favorite drills to teach players the 'kill' touch. The girl in this video is one of our D1 College players and her touch is absolutely out of this world. You can have that as well!

Don't forget to let me know how you got on over in our Facebook Group! You can get direct access to the team and myself, as well as be surrounded by like minded players!

Technical Breakdown Part 2: Learn to thread a killer through ball like Xavi

Today we take a look at passing maestro Xavi and how he is ridiculously consistent with his passing ratio! This video does a great job of also breaking down Xavi’s incredible vision, reaction and awareness. Check this video out
As you can see, Xavi is amazing at ‘finding’ that pass. He is so calm on the ball, his vision is superb and he seems to ‘see’ passes that other world class players wouldn’t. Check this video out we shot showing a drill I use to train players to be able to thread the ball through small openings.
What always amazes me with Xavi is his confidence of knowing where his passes are going. In our training program, The Soccer Vortex, we have a complete section dedicated purely to vision, reaction and awareness that teaches players to pass on reaction, over different lengths, using different styles of passes, just like Xavi. You can check that program out The Soccer Vortex

Technical Breakdown 3: What Is The Best 1v1 Move For Soccer?

Our third technical breakdown is a doozy! This was Zlatan’s first goal for Paris Saint-Germain a few years ago. This is what I would call your ‘typical’ Zlatan finish, cool with the ball at his feet, great use of the body to manipulate the defender with a phenomenal finish. Let’s break the goal down! 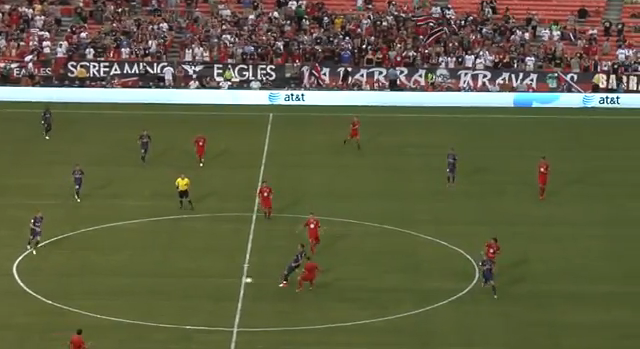 Ibrahimovic receives the ball is in his own half. Immediately plays it back to his midfielder (playing the way he was facing) and spins off his defender, and turns into the space. Note that the defender is still with him at this point 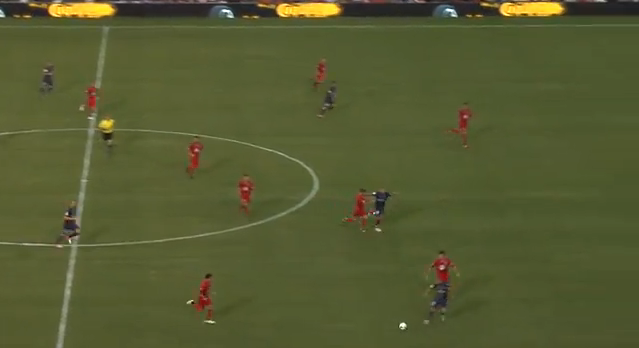 Before the player on the right has even touched the ball, Ibrahimovic has seen the massive gap and has already called for the ball. Note that he holds the defender off when starting his explosive run, actually pushing off him to gain an extra yard. This is where his experience and physical dominance comes in! 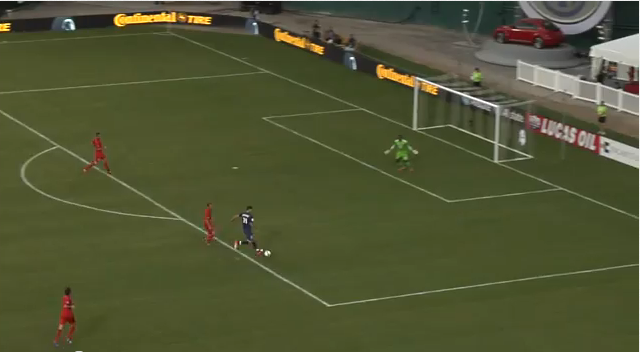 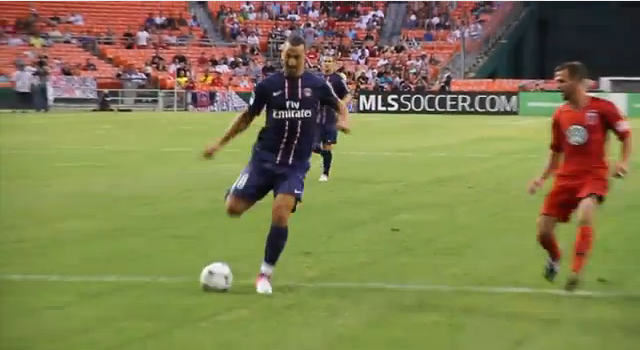 The ball played to Zlatan was impeccable, rolling in line with the run he had made. Zlatan has beaten his defender in the foot race, glanced up to where the keeper is and looks like he is about to shoot the ball. Look at how his body shapes like he is about to strike, this is one of our FAVORITE 1v1 moves at Beast Mode Soccer and we believe to be the most effective… Why? Defenders will always try to block the shot when coming from the side, and always shield their body when coming straight on (it’s human instinct and literally impossible to stop yourself from doing… Nobody enjoys taking a ball in the face!) Look how realistic the shot looks, would you fall for it? I would! 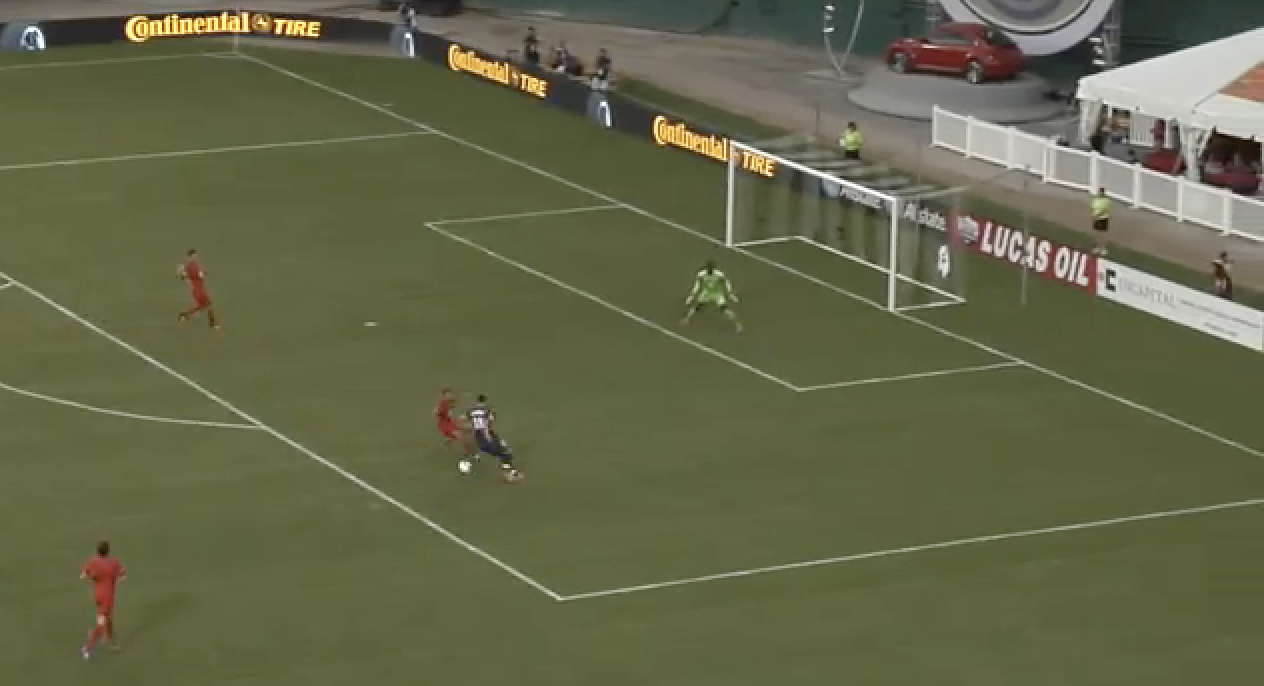 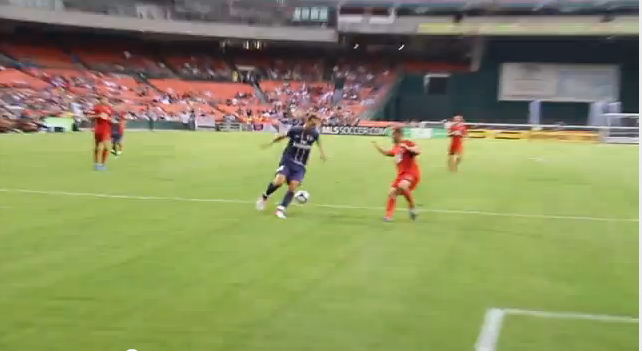 As the defender comes to shoulder level with Ibrahimovic whips a Cruyff turn (another move that makes an appearance in our footwork series). This wrong foots the defender, who to be fair recovers well. Look how controlled Ibrahimovic looks, he knows that the ball will do exactly what he wants! 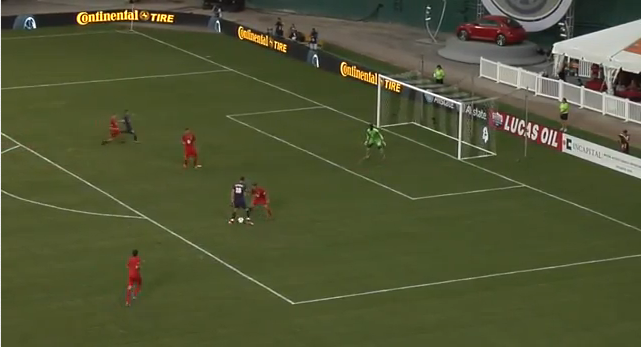 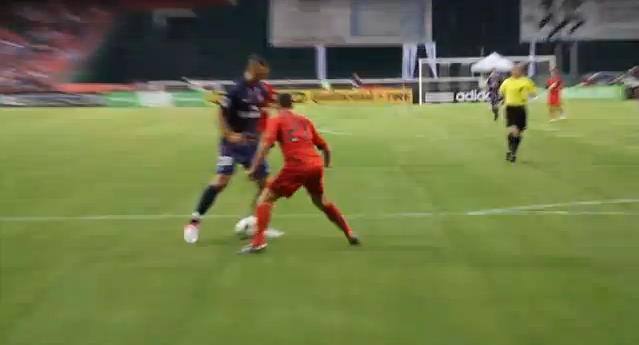 The defender did really well at this stage. He recovered from the Fake shot cruyff and now look how close he is to the ball. Ibra keeps the ball moving though and puts a quick left foot lunge step, then quickly pushes the ball across his body with his right foot (we call this the ‘scoop bell’), immediately shaping up for his left footed shot. 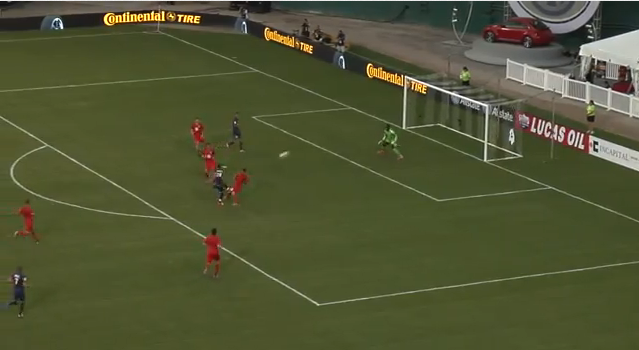 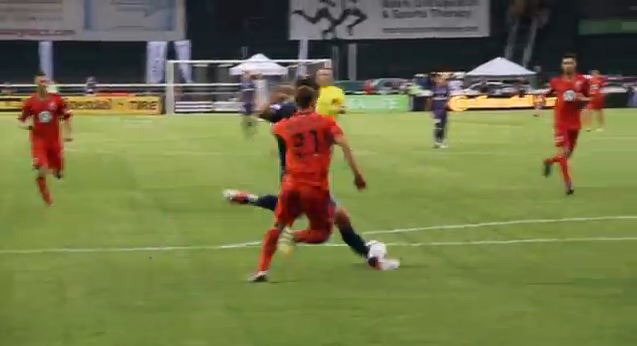 He allows the ball to roll just enough across his body, then gears up to strike. Again, the defender doesn’t actually do that poorly, he hasn’t gone to ground, but it is probably in the back of his head that inside the box, Ibra is the master of the fake shot. As Ibra shoots, he tries to block the shot but it’s too late, the ball is in the back of the net.

Check this finishing drill out that I do with USWNT star Alex Morgan. You can add that fake shot into any of the elements. Join our Facebook Group and tell me where Alex does the fake shot!